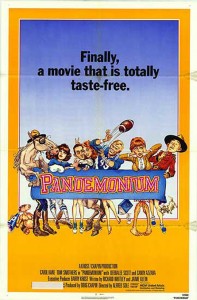 “Finally, a movie that is totally taste-free.”

A.k.a. Thursday the 12th (working title)

Laughter Lines: “I know every cheerleading camp here has ended in death, but I put all my lifesavings into this camp!”

Sense of humour reflects our taste in horror to some degree: What makes me roll on the floor howling with laughter might make you pull a face like someone just farted in the elevator. Thus, reviewing these parody films is always a bit pointless, as they were – and still are – nothing but a collection of cheap gags with a contemporaneous quality that are dated the second the shoot wraps.

Arriving eight months after Student Bodies, there’s no apparent box office information for Pandemonium, which was forced to change its name after Saturday the 14th came out the previous October, possibly scuppering its chances to make a splash, as it plays closer to the Friday the 13th-inspired shenanigans than Wacko or Class Reunion. Pandemonium is, for one, a hard word for me to type, and just ‘meh’ as a title. 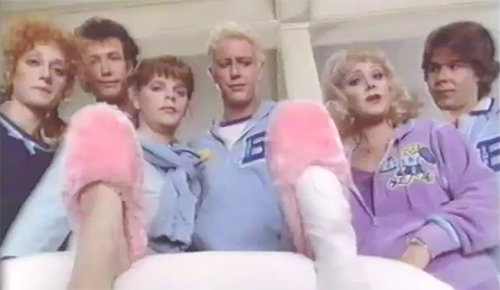 A spate of cheerleader slayings closes down a cheerleading camp (the javelin shish-ke-bob kill is actually hilarious), which is later reopened by longtime wannabe pom-pom waver Bambi (Azzara), who attracts six ‘teens’ to enrol and try to buck the trend of murders that plague all previous attempts to reopen the camp. We have Mandy, Sandy, Randy, Andy, Candy, and Glenn – Glenn Dandy – fresh faced and ready to bounce on mini-trampettes and into bed with one another. Unlike her peers, Candy possesses telekinetic abilities, which will come in handy later, methinks.

While carts of Japanese tourists interrupt practice, and the local Canadian mountie searches for two escaped killers (“Is Jarett the man who murdered his entire family with a hand drill?” / “That’s right. Then varnished them and made a lovely set of bookshelves.”) a black-gloved fiend tries to trim the camper roster, eventually succeeding with the help of rigged-trampolines, the electric toothbrush from hell, pom-poms, and megaphones. 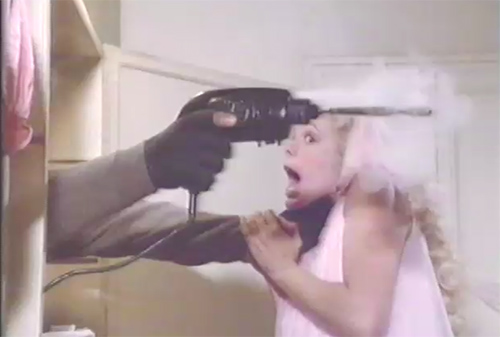 As with the other parodies of the time, and even Scary Movie, a good chunk of the jokes don’t really relate to the conventions of the slasher plot at all, and just exist to prop up the chuckles, and some would doubtlessly not fly post-millennium. There’s enough silliness to keep the motor running though, and it just has a colorfulness lacking in the other parodies, and just absorb some of the names in that cast!

The film kind of peters out towards the end, but at least features a not-obvious killer with motive and not some dream-within-a-dream bollocks, or no killer at all, and the body count actually goes somewhere north of four. Stupid, but let’s not pretend it was ever intended to be anything else. 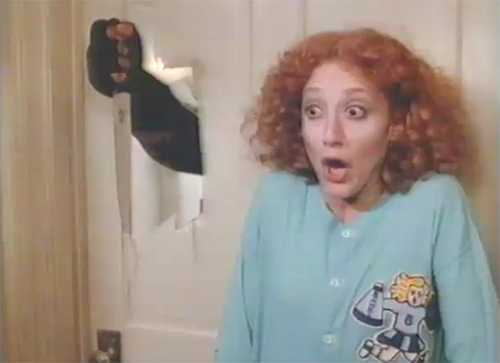 tagged with before they were famous, Friday the 13th, Nu-di-ty, slasher, spunky final girl, star power, summer camp, the 80s