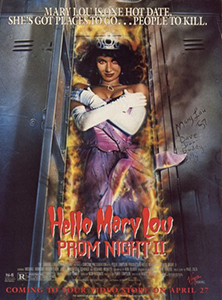 A.k.a. The Haunting of Hamilton High

Hello Mary Lou, goodbye heart goes the old song, and it’s quite apt in this case.

High school moniker aside, there’s nothing that links this Elm Street-snorting film with the 1980 revenge slasher, giving credence to the notion that it was originally intended to be a standalone affair.

Prom night. 1957. Hamilton High. Free n’ easy Mary Lou Maloney is caught by her date getting it on with another guy. Her jilted beau intends to humiliate her once she is crowned Queen of the Prom, but ends up setting her on fire in front of the whole school.

Thirty years later, mousy goody two shoes and prom queen hopeful Vicki (Lyon) unleashes Mary Lou’s vengeful spirit, which begins to turn her crazy in an attempt at full on possession to have the moment of prom glory she was robbed of. And, naturally, both of Mary Lou’s suitors have grown up to be the high school principal and the local priest respectively.

Meanwhile, Vicki’s friends slowly – very slowly – begin to fall victim to Mary Lou’s magical tantrums, including a girl squashed by lockers, electrocution via the most 80s of 80s school computers, and impalement by falling decor.

The Canadian 80s qualities shine through in a cheesy, endearing way, with plenty of day-glo, florescent lights, and beyond horrific fashion choices, underscored by one of Vicki’s friends telling her her fifties look is a crime against fashion. By this point, Mary Lou has somehow sucked her through a blackboard and possessed her completely – she makes out with her dad, throws her puritan mother through a door, and walks totally naked around the changing rooms stalking a friend in a weird pseudo lesbianic scene, fitfully culminating in the big prom finale that manages to channel both Carrie and Elm Street 2, as Mary Lou’s charred corpse literally busts its way out of Vicki.

Overall, the film goes through the motions of any possession opus, tossing in a handful of demises, crucially failing to ‘properly’ do away with the stock bitchy girl, who is summarily killed by a rod that falls from the ceiling at the dance, but at least it has some decent FX work and an interesting villain. Prom Night III: The Last Kiss sees the return of Mary Lou and wisely ups the laughs, resulting in a better film experience.