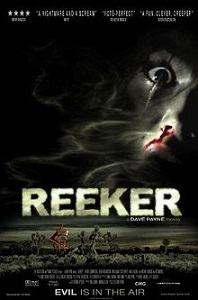 Laughter Lines: “Are you afraid of the dark?” / “No, I’m afraid of psycho desert crackheads who hunt small animals with Dahmer’s garden tools.”

Spoilers in the road ahead. Commencing with a great double-shock opener which gives new meaning to the term roadkill, this strange little film, with echoes of Dead End, the terrible Soul Survivors, and even The Sixth Sense, strands five college kids during a ride share for a desert festival at a seemingly abandoned roadhouse.

The phones are out, nobody’s around for miles, and whomever was there before them was obviously a bit mad – and might still be there. They’re soon joined by Michael Ironside in his enormous RV, looking for his absent wife. Apparent ghosts also appear, though only to us, the characters can’t see them for the most part.

A bad smell fills the air and an incorporeal cloaked figure manifests to start killing everybody one by one with a variety of almost comically oversized and bizarre contraptions, forecast each time by the stench – one poor soul is pulled down into an outhouse toilet, recalling Sleepaway Camp II. The characters fall as expected, leaving the predictable pair to duke it out with their hunter. The blind guy falls back on his other senses to help save the day. 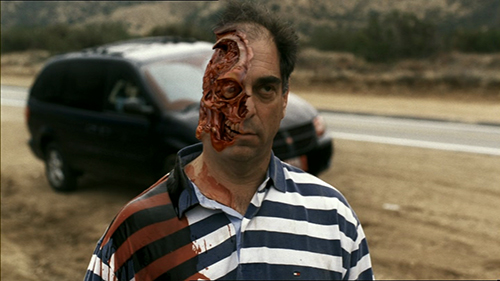 The twist – obvious to anyone who has seen the aforementioned titles – is nicely realised and elevates Reeker from being confusingly dumb to a little bit smart, wrapping up its loose ends without the need to staple gun on a last second shock.

Going the funny-gruesome route was the right move and there are some genuinely LOL moments from Scott Whyte’s paranoid frat boy, and Ironside is dependably amusing. A pre-Ugly Betty Eric Mabius also turns up as a nasty drug dealer. Watch to the end of the credits to read the disclaimer from the filmmakers calling out critics before they whip up any clever puns on the title to say the movie stinks.

NO MAN’S LAND: THE RISE OF THE REE 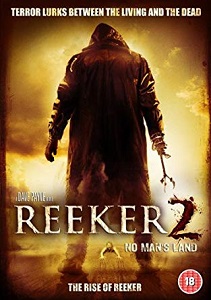 “Terror lurks between the living and the dead.”

Reeker‘s semi-clever twist was clearly enough for creator Dave Payne to forge ahead with a sequel with bits of a prequel to prevent in from becoming a Xerox of the first one. Both play like reverse Final Destination instalments though: The cast members of gorily offed by the blurry Krueger-esque creature, and the high concept FX work is showcased at the end as the event that caused their induction into limbo is revealed.

It’s back to the secluded diner again, with a trio of bank hopeless robbers in the mix, father and son issues between local Sheriffs, and not-so-funny comic relief is inserted to try and thicken and lend depth to the characters, but little of it works after the opening manoeuvre, which veers off in a not so predictable direction.

The ultimate catastrophe is good, but not different enough to that of the first film, rendering it all a bit void. Askew is good as the leader of the rubbish robbers though.

tagged with get your own ideas!, gore o'clock, slasher, spoilers