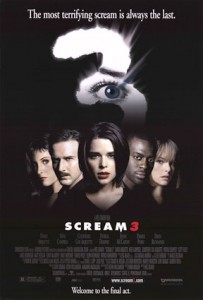 “Welcome to the final act.”

Dire-logue: (after the murder of a Stab cast member) “He was making a movie called Stab. He was stabbed.”

The problem with Scream 3 is that it had a clever joke threaded through it that got lost in the blur of a new writer trying to make ends meet. What is it? It’s that there’s two mysteries at play: Who is the killer in Scream 3 and who is the killer in Stab 3? There are two Sidney’s, two Gail’s, two Dewey’s. One might be a killer or victim in either. Sadly, Ehren Kruger couldn’t make it work right and most people ignored it.

What’s left is a respectable effort all the same. Compared to 90% of slasher films, Scream 3 is still top-notch stuff but there’s a definite sense of boredom on behalf of the returning cast and crew that drowns that enthusiasm of the newcomers. Kevin Williamson’s long-delayed treatment was finally handed to Kruger, possibly something that’s been repeated in the imminent Scream 4 if production rumours are to be believed.

Neve Campbell also seemed tired of going through the motions as it-girl Sidney, who is also (understandbly) sick and tired of being chased by loons in Father Death masks. So a lot rests on the shoulders of Courteney and David, by then finally married off screen, playing ever-bickering Gail and Dewey, this time split up asnd reunited on set after Cotton Weary is slain in the pre-credits slaughterhouse, which is one of the better moments.

Fictional follow-up Stab 3: Return to Woodsboro is immediately thrown into jeopardy by the news, which pulls in Hollywood detective Dempsey and his sarcastic partner. Meanwhile, Sidney is hidden away in the Californian wilderness with her dog and a dial-in job as a crisis counsellor.

A second murder shuts down the film and the killer manages to contact Sidney, who takes the bait and joins her old buddies to once and for all find out who the fuck is dicking with her and end the madness.

The subtlety of the first two films is out the window as almost every utterance by the new cast members is tainted with suspicion. Even with a crowbarred-in cameo by Randy, the cast seem oblivious to horror movie rules and split up time and time again once they’ve been gathered in a Beverly Hills mansion for the homerun.

Still, there are some great touches: Sidney’s exploration of the set of her old house nicely echoes events of the original film and once the killer reveals themself and spits out another long-winded motive (you gotta wonder why these guys spent so much time trying to kill her if all along they planned on giving a lecture on the whys, hows and whos?) she fights hard, even saying she doesn’t care about the reasons as she’s heard it all before.

Parker Posey supplies some good comic moments as Gale’s fictional counterpart who thinks she can do a better job of investigating and then cementing herself to Gale’s side when the killer targets her. The other actors and crew members of Stab 3 fulfil their marginal walking-corpse roles without much ado. They exist purely to say a couple of witty things and then die.

Williamson’s schtick of trilogies is played out quite pointlessly (made all the more redundant by the arrival of the fourth film) with a lot of blah about rules n’ stuff that don’t apply convincingly. Yes, it all harks back to the start and Sidney’s mom (shown in a creepily close close-up from the photo Sidney had in the first film) but it’s clear that, despite his insistence otherwise, Scream was not designed to be a trilogy. You only have to scan the unused script for the second film where Sidney dies at the end to realise that.

As usual, cameos from industry friends are littered throughout: Jay and Silent Bob turn up (with Craven in the background); the Carrie Fisher exchange is fittingly amusing.

The film also felt the force of a screen-violence clampdown in the wake of the Columbine massacre in 1999 and the amount of claret on show is reduced from the first two, with quick cuts away from fatal slashes and stabbings or attacks obscured by the position of the camera or people/objects in the frame. 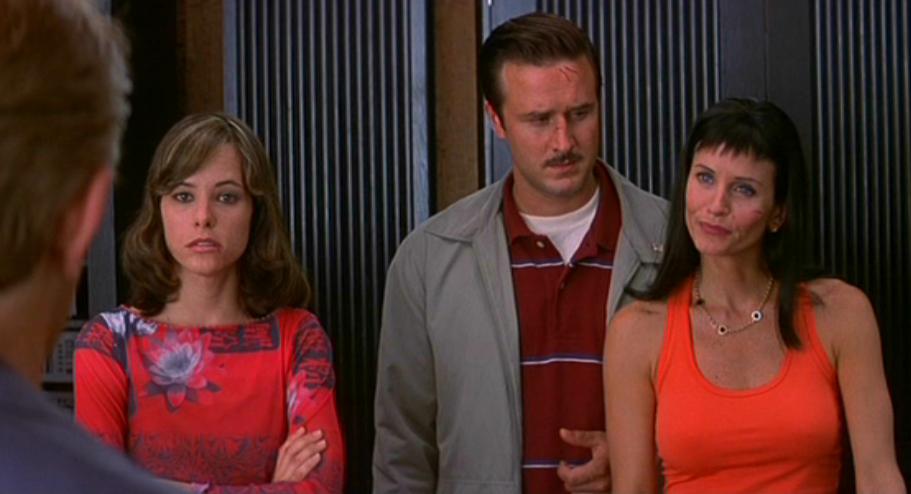 Looking at Gail’s hair, Dewey wondered what he ever saw in her

So it’s drier, unsubtle, a little all over the place and, surprisingly, occasionally badly acted. Plus Courteney Cox sports one ugly-ass yellow suit and seems to have had her hair cut by Stevie Wonder. Kruger’s dialogue isn’t as sharp as Williamson’s and his reasons for jockeying victims into position have become the cliches that the first film made fun of. This is not to say he’s a bad writer by any stance; Arlington Road was awesome and I really liked The Skeleton Key. The poor guy was handed the biggest horror franchise going and told to wrap it up. Had it been ‘just another sequel’ the results might’ve been very different.

A disappointing finale and one that hasn’t aged very well but its enjoyable elements outweigh the sluggish ones. I’d recommend watching it after sitting through something like I Still Know What You Did Last Summer, just to appreciate that they made a decent flick, just not a wonderful one.

Blurbs-of-interest: the Arquettes were later in The Tripper (which he directed); Henriksen was also in The Horror Show, Color of Night and Madhouse (2003); Matt Keeslar was in Psycho Beach Party; Deon Richmond was in Hatchet; Carrie Fisher was the housemother in Sorority Row. 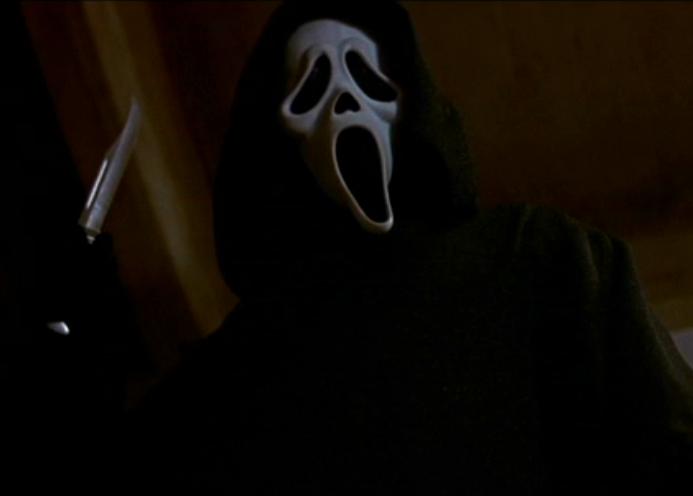