Just leave the asbestos there… 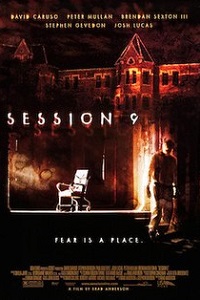 An asbestos removal crew takes a job at the abandoned Danver Memorial Hospital, hoping to clear the place in a week, prior to his renovation, in the hope of obtaining a generous bonus.

Spending a lot of time alone in the oppressive atmosphere of the former mental institution begins taking its toll on the men: Company owner Gordon is having difficulty adjusting to life as a new father; while Hank and Phil are still at loggerheads over the woman they both left; academic Mike is reconsidering law exams; and Gordon’s be-mulleted nephew provides the team with their inexperienced scapegoat. As work continues for long hours and tension mounts, one of them becomes obsessed with the archived interviews of a schizophrenic former patient and eventually cracks himself.

Session 9 isn’t your average stalk n’ slasher flick by any metric, and it’s only the tail end of things that it shows its hand as influenced the sub-genre. Director Anderson firmly places the accent of terror on the environment itself, rather than ejector-seat scares – some images really send a shudder up the spine in a not-dissimilar way to the more effective found footage horrors. Long, torch-lit corridors and flickering overhead lamps, creaks in the dark, and the dirty walls of the asylum’s interior all contribute to a feeling of desolation that would turn anyone insane.

It’s one of those watch-it-back-for-the-hints films, with subtle drops as to whom the killer is left all over. The material on the archived tapes is also positively compelling on its own. Even as the end credits begin, there’s certainly no clarification of the previous events, a strategy repeated later in the similarly-constructed but inferior Identity.

Not for all tastes, but fans of slow-burn horror should take a walk down these creepy hallways.

tagged with before they were famous, spooky