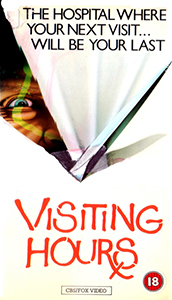 “The hospital where your next visit… will be your last.”

First off, Jean Claude Lord is a bad ass name. For anyone.

Shame that’s where the bad assery of Visiting Hours comes to a halt with as much high octane action as a narrowboat derby on the Norfolk Broads.

And it is a shame because this rather plush Canadian production starts off so well, with Lee Grant’s rather confident reporter setting a couple of chauvinists right live on the telly, which angers all round unpleasant viewer Colt Hawker (Ironside), who then decides to kill her.

A tense scene in which Lee returns home to find everything a bit off culminates beautifully with butt-naked Hawker bursting out wearing nothing but some of her clip-on jewellery and slashing at her. She escapes with the aid of the ever-handy dumb-waiter and is admitted to the county hospital.

Dissatisfied with his failure, Hawker spends the next 80 minutes trying to gain access to her hospital room to finish the job. Why he didn’t just hop downstairs and kill her before is unclear. Visiting Hours skips from genre-to-genre like a frog with ADHD, never sticking with being a slasher film, or an anchorwoman-in-peril thriller, or boring hospital soap. At times it manages to straddle all three at once. Make no mistake, this is no Halloween II. Or Hospital Massacre.

What few victims there are are misidentified patients and luckless schmucks who are in the wrong place at the wrong time; he cuts a respirator for an old lady and creepily photographs her dying, then knifes the nurse who comes to help out. But most the time it’s Lee Grant being paranoid, Linda Purl’s sweet but jittery nurse being sweet and jittery, or Ironside living his rather sad life. 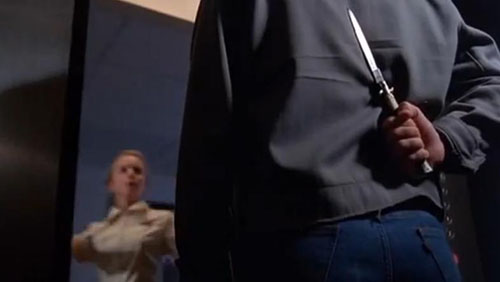 Visiting Hours does draw the viewer more into the ‘story’ of the killer. Rather than a masked loon running amok for reasons yet to be revealed, Colt Hawker is quickly identified as some angered-up sexual miscreant who detests strong women, wears a leather vest, and flashes back to his over-touchy-feely dad playing around with him. Is this insightful or inciteful? Arguably, the audience doesn’t want to feel sorrow for the killer, especially when his primary hobby is cutting up women – a topical issue concerning the genre during this era – however, the film could just be digging deeper.

For it’s pointless inclusion on the Video Nasties list – I’ve watched both versions some years apart and can’t tell the difference – Visiting Hours is a rather tame affair, buoyed by big-name actors, there’s little exploitation on show. Ironside’s threat is far more psychological than visceral. However, the straying from the tried and tested slasher formula is what does the most harm: Visiting Hours is boring. 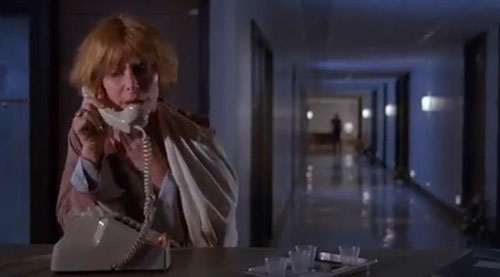 Final Girl said of it that she was surprised it didn’t clock in at five hours, which, considering there’s more padding on show than you’d find at auditions for TOWIE, is totally valid. For my repeat viewing, I had to watch in shifts so my eyes would remain open. After the initial assault, it’d be more interesting to go and sit in a hospital waiting room for two hours than watch this again.

Bizarrely, despite Ironside’s solid depiction of Colt Hawker’s sad-ass psycho, he’s a pretty incapable killer. His main quarry escapes the first time, he botches killing somebody else, leaves a teen babysitter to survive, and again fails to execute his plan on several more occasions. He did better in American Nightmare, which also featured Lenore Zann as a ‘lady of the night.’

Plus points for performances and casting a woman in her mid-50s as the final ‘girl’, everything looks slick, but balance is lost in the expense-to-boredom ratio. But I always enjoy a film where there are genre regulars, and because Canada only had 23 actors in the early 80s, most of them are in this too. If only they’d had more conviction in what they were creating – either the horror, thriller, or soap – it might’ve been a place worth visiting.

And why is there a dog seemingly employed by the hospital living in the basement? 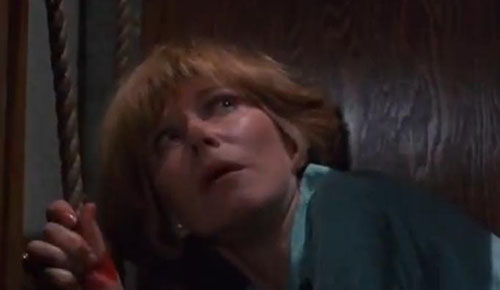 Blurbs-of-interest: Ironside was also in Hello Mary Lou: Prom Night II, Children of the Corn: Revelation, Fallen Angels and Reeker; The Shatner was a criminology pro (ha!) in American Psycho II (ha!); Lenore Zann was one of the Crawford Top Ten of Happy Birthday to Me and can also be seen in American Nightmare and PrettyKill; Harvey Atkin was in Funeral Home.