Dinner and a movie? 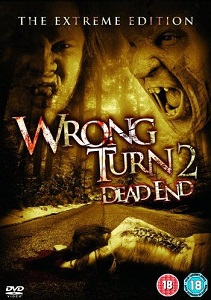 A slightly overrated flick for a change, Wrong Turn 2 came courtesy of Adam Green’s buddy Joe Lynch, who throws virtually everything at his project, going OTT on the back of the straight-faced 2003 original, which pit city kids against a trio of backwoods in-breds, marrying together the best attributes of Just Before Dawn and Deliverance with a dash of post-Scream sensibility, without going too far down the ha-ha track.

Cashing on the then-zeitgeist of reality TV horror, WT2 centers around a survival show named Ultimate Survivor: Apocalypse, presented by retired marine Rollins, which sends six aesthetically pleasing youngsters into the woods to fend for themselves against production-created tasks and the like. However, they run afoul of the extended family of the cannibals from last time, including Ma, Pa, several kids – all deformed in even whackier ways than the trifecta of loonies from the first movie. 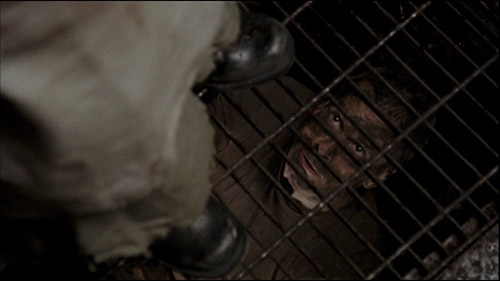 Masses of drippy gore, a vegan being force-fed minced-person, T&A, 80s-style macho posturing, mutant incest, a backwoods birth, a meat grinder you could drive a truck through – it’s easy to see why gore fans had a lot to shout about. Elsewhere, the film toys with expectations, setting up an obvious final girl, only to kill her early on and nominate a far more rough-cut character as a proxy. Rollins owns the entire flick as the hard on the outside, soft-centered presenter, who learns early on of the threat and goes all Platoon as the situation worsens.

Lynch’s leanings towards Evil Dead-style if-it-moves-throw-a-bucket-of-blood-over-it splatstick isn’t usually my kind of thing, and Wrong Turn isn’t a series I can really get that enthusiastic about (original excepted), but if you catch this during a couple of hours where you haven’t recently, or don’t plan on imminently eating anything, it’s good for some sticky laughs. 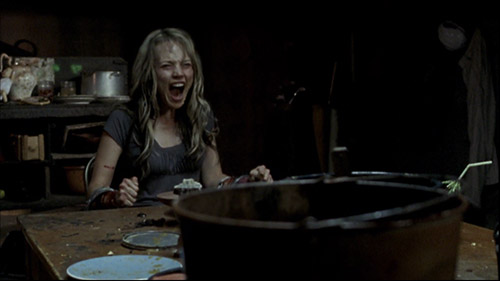 Blurbs-of-interest: Erica Leehrsen was previously in The Texas Chainsaw Massacre remake, Lonely Joe, and Mischief Night; Daniella Alonso was in The Collector; Texas Battle and Crystal Lowe were both in Final Destination 3, and she was also in the Black Christmas remake and Children of the Corn: Revelation; Ken Kirzinger played Jason in Freddy vs Jason and played Mason in Stan Helsing.